SHS refuses to back down in Senior Night dual with Vikings

Senior Wyatt Marker (right) takes on Brett Meyers from Coeur d'Alene in a 132-pound bout Wednesday at Les Rogers Court. Marker won by pin in the third round.
(Photo by DYLAN GREENE)

Owen Wimmer (right) faces off with his opponent at 182 pounds Wednesday.
(Photo by DYLAN GREENE)

Forest Ambridge warms up prior to Wednesday's dual.
(Photo by DYLAN GREENE)

Emma Garman gets ready for the second round of her bout at 113 pounds.
(Photo by DYLAN GREENE)

Emma Garman tries to escape the grasp of her opponent Wednesday.
(Photo by DYLAN GREENE)

Andrew Duke (left) faces off with his opponent Wednesday.
(Photo by DYLAN GREENE)

Adam Belgarde fends off his opponent during Wednesday's dual.
(Photo by DYLAN GREENE)

SANDPOINT — One of the best wrestling teams in the state walked into Les Rogers Court on Wednesday night — but the Bulldogs weren't intimidated at all.

Sandpoint gave Coeur d'Alene quite the fight, but in the end, the Vikings emerged victorious, 53-33.

Head coach Jake Stark said his team proved to him that they can go toe-to-toe with anyone they lineup across from.

"I feel we can hang in there and battle with teams like Coeur d'Alene," he said. "It was a pretty hard-fought match."

Leading 41-9 with just six matches left, the Vikings appeared to be headed toward a comfortable dual win. However, the Bulldogs weren't ready to surrender.

A potential upset victory was within sight for the Bulldogs, but Coeur d'Alene won the last two matches by pin to end those hopes.

Stark felt the Bulldogs had their best showing of the season this past weekend at the Pacific Northwest Classic, and they carried that intensity into the Senior Night dual with the Vikings.

"We're right there where we can just keep climbing," he said.

Marker, a captain, came up clutch for the Bulldogs at 132 pounds. He trailed his opponent 7-1 after two rounds, but in the third he fired off the mat, took control and pinned Brett Meyers from Coeur d'Alene in 23 seconds.

"I think he just senior'd up," Stark said. "He decided he wasn't going to lie down and this was his last chance to do it in front of the home crowd and I'm really proud of him. That kind of gave us a little momentum."

The Bulldogs fell behind 23-0 to start the dual and were desperate for a victory. Fortunately, Forest Ambridge delivered one at 126 pounds.

Ambridge squared off against Alyssa Randles, who won the girls 126-pound title at the Rollie Lane Invitational. He took a 4-1 lead after one round, but Randles battled back. The score was 6-4 in favor of Ambridge heading into the decisive third round.

The junior was able to fend off Randles in the final moments to earn a 6-5 victory.

"Alyssa is no slouch," Stark said. "Him getting a win right there is going to boost his confidence."

The bout brought the crowd to its feet.

"Everybody was into it, including myself, and that's what duals are all about," Stark said.

Tyler, Hinds and Wimmer all pinned their opponents in the second round.

"I'm really proud of Jorden Tyler," Stark said. "He's kind of been the underdog all year and he finally really stepped it up."

Hinds continued to showcase his skills.

"Hinds has been on a really hot streak since Pacific Northwest," Stark said. "He's just kind of an unorthodox type of guy ... and he's just wrestled for so long that he just ends up in a good position. If he gets a kid on his back, he's going to pin him."

Coeur d'Alene won eight matches by pin. Stark said his team was close to getting a few more victories and making things a lot more interesting.

"We just got to go back to practice and work on the small things," he said, "and continue to keep getting better."

Sandpoint heads to Post Falls for the River City Duals on Friday and Saturday.

Adam Belgarde fends off his opponent during Wednesday's dual.

Andrew Duke (left) faces off with his opponent Wednesday. 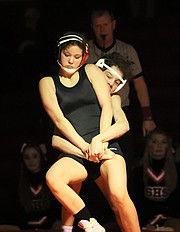 Emma Garman tries to escape the grasp of her opponent Wednesday.

Emma Garman gets ready for the second round of her bout at 113 pounds.

Forest Ambridge warms up prior to Wednesday's dual.

Owen Wimmer (right) faces off with his opponent at 182 pounds Wednesday.