An aerial view of the Scotch Creek on Sunday. The fire is among those combined into the Kootenai River Complex, which has burned an 10,780 acres in Boundary County.
(Photo courtesy U.S. FOREST SERVICE)

An aerial view of the Eneas Peak Fire in Boundary County taken early on in the fire. The fire is now classified as part of the Kootenai River Complex.

An aerial view of the Eneas Peak Fire taken on Aug. 19. The fire is now considered part of the Kootenai River Complex, which has burned just under 11,000 acres in Boundary County.

Firefighters are dropped off on Eneas Peak on Aug. 20. The fire is now part of the Kootenai River Complex, which has burned just under 11,000 acres.

A map showing the Kootenai River Complex in Boundary County.

A Forest Service firefighter works on the Diamond Watch Fire in Pend Oreille County, Wash. The fire is located 5.5 miles due west of Nordman.

An area burned by the Diamond Watch Fire in Pend Oreille County, Wash.

Crews are conducing structure assessments to reinforce protection on private property on the Westside Road. In addition, Work has also begun to prepare old forest rounds to prepare a check line to slow the fire's spread.

Water drops were made on the eastern flanks of the Scotch and Russell Mountain fires. And, on the Katka Fire, crews are working on direct perimeter control lines to control and suppress the fire, U.S. Forest Service officials aid.

A infrared detection flight on Sunday found the complex fires increased by 1,357 acres, with most of the growth occurring on the Russell Mountain and Trout fires.

Forest Service officials said the fire, which is under the command of Type 2 Northern Rockies Incident Management Team 4, is being fought by 204 firefighters. A Hotshot crew has joined the Type 2 crews to help construct the direct perimeter control line, officials said.

All planned containment lines have built on the east, west and south sides of the Diamond Watch Fire, located on Diamond Peak in Pend Oreille County, Wash.

The fire, which is located 5.5 miles due west of Nordman, Idaho, is being managed with a contain/confine strategy due to the area's rugged, steep and dangerous terrain, Forest Service officials said.

"Firefighters are using a combination of natural barriers, like Diamond Creek, and constructed fireline to stop the fires spread beyond the defined areas," officials said in a press release. "After almost a week of warm and dry conditions, the fire has slowly moved down the southern ridge and become a bit more active in the interior where it’s burning jackstraw piles of naturally dead and down trees."

Firefighters are patrolling nearly seven miles of containment lines and heavy equipment crews are working to improve Forest Service roads near the fire. A shaded fuel break built along FSR 308 and containment lines with hoselays on the west and east have created areas where firefighters can safely take direct action, officials said.

The higher temperatures and increased winds contributed to fire growth inside containment lines, Forest Service officials said. Located on the Colville National Forest, the Thor Fire has burned roughly 800 acres since it was sparked by lightning in mid-August.

Due to the steep and rugged terrain as well as large amounts of dead trees and "timber litter" — leaves, needles, and twigs on the forest floor — officials said that a direct attack on the fire would be unsafe. Instead, an "indirect line is being utilized toward the objective of full suppression," they said in a press release.

The nearby Slate Fire, which has burned roughly 100 acres, officials said there is minimal threat to recreation areas, infrastructure and private property.

Detected on Aug. 31, the Boulder Mountain Fire is located nine miles northwest of Cusick, Wash. The cause of the fire, which has burned an estimated 1,210 acres is under investigation.

The fire is being fought by Great Basin Type 2 Management Team No. 7 with 191 fire personnel assigned to it. A mix of state, federal and private lands are impacted.

Teams spent Sunday scouting opportunities to engage the fire and draft ways to minimize its growth. Aircraft played a major role in slowing the fire's growth with air tankers dropping fire retardant and "scoopers" and helicopters dropped water until they were diverted to another incident late in the day, officials said.

Heavy brush and dead and down timber continue to drive the fire's growth, which officials said is moderate with some group tree torching resulting in small spot fires.

USFS crews are managing the Columbus Fire and the Bear Gulch Fire with an indirect suppression strategy.

The Columbus Fire, approximately 6 miles northeast of Murray, has been estimated at 300 acres. A few miles to the south is the Bear Gulch Fire, which has burned an estimated 60 acres.

Both fires are steep terrain with limited access opportunities for direct attack by firefighters.

The largest fire on the district is the Blackburn Fire at 225 acres. Discovered in mid-August, the fire is located just north of the Heller Creek Campground near the headwaters of the St. Joe River.

Sparked by lightning, the fire is listed at 3% containment.

• On the Kootenai River Complex, residents are asked to avoid Trout Creek Road (Forest Service Road 634) as well as nearby trails to allow for fire suppression efforts in the vicinity. Trails included are Fisher Peak (No. 27), Pyramid Lake (No. 13), Pyramid Peak (No. 7), Trout Lake (No. 41) and Ball and Pyramid Lakes Trail (No 43).

While there are no evacuations in place, those living on West Side Road closest to Ball, Burton and Clark creeks have been upgraded to "set" status under the Ready-Set-Go evacuation procedure.

Under ready, residents are advised to have a plan to evacuate if necessary, while set status asks residents to begin putting their plan into place. Under go status, residents are told to leave immediately due to an imminent threat.

• On the Diamond Watch Fire, closure orders are in effect for Forest Service roads 311, 308, and 1362H in the vicinity of the fire. However, FSR 1362 remains open. Petit Lake and is associated campsites are within the closure area.

Some camping areas along the southwest portion of Sullivan Creek Road have been notified that they are on a “set” be ready evacuation status and should be ready to leave if asked by local authorities.

• On the Thor Fire, roads connecting to the Idaho Panhandle National Forest are closed starting at the junction of FSR 302 and FSR 1013.

• All methods of travel are prohibited (foot, mechanized, motorized and stock) on the closed roads and area.

• As a reminder, civilian drones are not allowed around active fires. Flying drones near an emergency scene is against the law and will interfere with firefighting aircraft, working against the firefighters on scene.

• A fire watch is in effect Tuesday through Wednesday evenings, with dry and unstable weather conditions predicted. In addition, gusty winds and dry conditions are predicted for Wednesday.

• Area residents can go online to visit nixle.com or text home zip code to 888777 to sign up for emergency alerts. 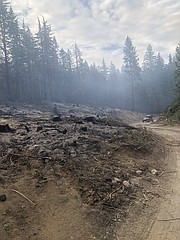 An area burned by the Diamond Watch Fire in Pend Oreille County, Wash. 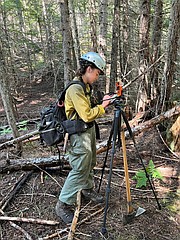 A Forest Service firefighter works on the Diamond Watch Fire in Pend Oreille County, Wash. The fire is located 5.5 miles due west of Nordman. 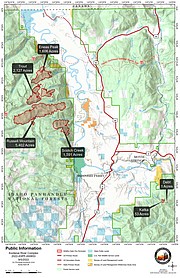 A map showing the Kootenai River Complex in Boundary County. 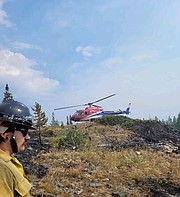 Firefighters are dropped off on Eneas Peak on Aug. 20. The fire is now part of the Kootenai River Complex, which has burned just under 11,000 acres. 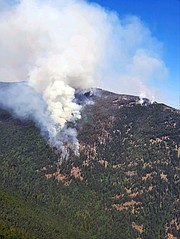 An aerial view of the Eneas Peak Fire taken on Aug. 19. The fire is now considered part of the Kootenai River Complex, which has burned just under 11,000 acres in Boundary County. 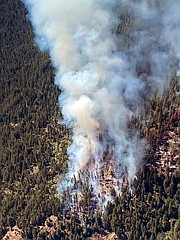 An aerial view of the Eneas Peak Fire in Boundary County taken early on in the fire. The fire is now classified as part of the Kootenai River Complex.