A tribute created for George Dong by his family and showing his military service.

George Dong, right, is pictured at a ceremony presenting the Congressional Gold Medal awarded to Chinese American veterans of World War II. "There were four living veterans receiving this award," said Dong's daughter, Delia Freney, who also received a medal posthumously for her mother's brother, Harold Sam. "My dad wore a tuxedo as he proudly walked to center stage to receive his medal. The medals received were bronze duplicates and the actual Gold Medal was on display. It will be in the Smithsonian Museum next year."

Delia Freney dances a samba with her father, George Dong, at a gala dinner following a ceremony presenting Wong and other Chinese American soliders with the Congressional Gold Medal.

George Dong, left, at a ceremony laying a wreath at the World War II Memorial.

George Dong was born in San Mateo, California on April 16, 1925, to parents who were both born in China. He would go on to serve in the U.S. Army in both World War II and the Korean War.

He recently was honored with a Congressional Gold Medal for his service to his country.

Dong primarily grew up in San Francisco, Chinatown, excelling in many sports including track and field where he earned a lLetter in recognition for his athleticism.

As the country endured the Depression he left school to work many jobs to help support his family. One of his most memorable jobs was working on a relative’s chicken farm in Petaluma. While some of his coworkers struggled to lift a 50-pound bag of feed he worked out so that he could lift a 100-pound bag with his non-dominant arm. Because production of food was considered essential to the war effort he was exempt from military service.

During high school years he saw an advertisement to join the Army Signal Corps. He applied and passed an exam that qualified him to attend training at a special technical school. At the end of this training it was discovered that he was too young to enlist in the Army and he returned home to San Francisco.

However, after reaching the age of 18, on January 13, 1944, George T. Dong enlisted in the Army as a United States citizen. On his United States World War II Army enlistment records the recruiter listed him as “white” but he told the recruiter that he is Chinese. He was told it didn’t matter and it was better it was listed as white; George did not argue.

He hoped that since he had earlier passed the Signal Corps test that he would be assigned to a signal init. Instead, he was assigned to the 411th Field Artillery Group.

He was sent to Fort Lewis, Washington, for basic training. He joined the company mess as a cook. During that time the coffee was made by putting coffee grounds in a pillow case and then dipping the pillow case into a large kettle of boiling water. The results were not well received by the soldiers and most in the company complained about the poor taste of the coffee. George went about improving the coffee by boiling the loose grounds in the kettle for better flavor. The problem of having loose grounds floating in the coffee was solved by adding some cold water and salt to the kettle, which caused the grounds to settle at the bottom of the pot. Word spread that George made the best coffee and soon officers and men from many units stopped by to share a cup.

His unit then travelled across the country by train from to North Carolina. Along the way the train made several stops at many towns and at every stop George recalls that all the soldiers would exit the train for daily physical training and calisthenics.

The 411th Field Artillery Group then moved to Camp Kilmer, New Jersey, in final preparation to travel to Europe where they boarded the USS Argentina for England. They arrived in England on November 12, 1944. The unit was sent to northern Wales continuing to train before the unit travelled to Liverpool, England where they embarked for France.

Upon landing they moved toward the frontlines to support forces that were securing areas fighting in the Battle of The Bulge. George took an opportunity on furlough to visit his brother Elmer who was in a nearby unit at that famous battle.

Along the way he saw the destruction caused by the battle. Villages had been damaged or destroyed . Livestock had been killed. The human toll was enormous. There were many hundreds of people killed and thousands of displaced civilians. George’s unit set up their kitchen and began to feed those in need.

In March, he entered Germany where his unit continued to support the American forces as they pushed deeper into Germany.  They saw evidence of the atrocities committed at the Buchenwald concentration camp. They processed thousands of German POWs and actively searched for war criminals.

Their unit was in Torgau, Germany when U.S. Forces met units of the Red Army on the Elbe River. The Germans would rather be captured by the Americans than the Russians. George witnessed many German soldiers drown due to the cold and swift waters of the narrow Elbe River as they tried to cross carrying heavy gear. Once on shore, the German soldiers were searched with fixed bayonets to identify SS officers.

In 2017, George returned to Torgau where there is now a memorial erected to recognize this location to the end of World War II. There are 3 flags that now fly in peace; United States of America, Germany and the Soviet Union. Their unit was positioned there until the end of the war.

George was able to visit Paris for a few days after the war ended. When he returned to his unit they moved south near Nuremberg. There, his kitchen was used to feed the thousands of displaced civilians.

In October, his unit packed up and returned to France before returning to home to the United States. By the end of October, the 411th Field Artillery Group was disbanded at Camp Shanks in New York.

George travelled by train back to San Francisco, where he found a long career at Dean Witter & Co. He retired from the company after 30-plus years when his department was transferred to the Twin Towers in New York City, N.Y.

George joined the National Guard and was called into the Korean War as sergeant first class until his honorable discharge in July 1952.

In September 1949 he married Laura Sam in San Francisco. George has one daughter, Delia; and two grandchildren, Michael and Lauren.

On December 9, 2020, Chinese-American veterans who served in World War II — including Dong — were collectively awarded the Congressional Gold Medal in the first online ceremony. An in-person ceremony was held Sept. 30, in Washington, D.C.

The medal seeks to honor those “who have performed an achievement that has an impact on American history and culture that is likely to be recognized as a major achievement in the recipient’s field long after the achievement.”

Despite being subject to racial discrimination for decades — the Chinese Exclusion Act of 1882 was not repealed until 1943 — more than one in ten Chinese Americans joined the armed forces between 1941 and 1946.

This medal is a bronze duplicate of the Congressional Gold Medal awarded to Chinese American Veterans of World War II in recognition of their dedicated service during World War II. During World War II, they served in every theater of war and every branch of service. They earned citations for their heroism and honorable service, including the Medal of Honor.

The obverse design depicts Chinese American servicemen and a nurse, representing all United States service branches in World War II and highlighting that they fought in every theater with honor.

The reverse design features an Iowa class battleship, an M4 Sherman tank, and a P-40 Warhawk from the Flying Tigers showcased in front of a World War II-era American flag. 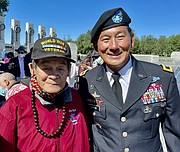 George Dong, left, at a ceremony laying a wreath at the World War II Memorial.

Delia Freney dances a samba with her father, George Dong, at a gala dinner following a ceremony presenting Wong and other Chinese American soliders with the Congressional Gold Medal. 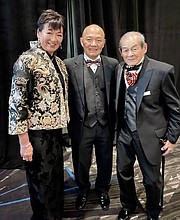 George Dong, right, is pictured at a ceremony presenting the Congressional Gold Medal awarded to Chinese American veterans of World War II. "There were four living veterans receiving this award," said Dong's daughter, Delia Freney, who also received a medal posthumously for her mother's brother, Harold Sam. "My dad wore a tuxedo as he proudly walked to center stage to receive his medal. The medals received were bronze duplicates and the actual Gold Medal was on display. It will be in the Smithsonian Museum next year." 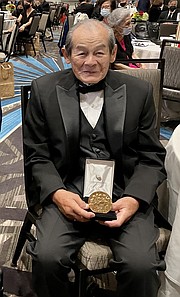 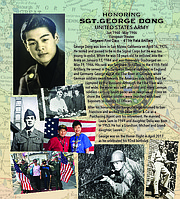 A tribute created for George Dong by his family and showing his military service.