SSgt. Bill Hunt (no shirt) is pictured loading a Jeep in 1966 as he works with indigenous soldiers during his third tour in Vietnam.

I would like to take this opportunity to thank the Bonner County Daily Bee and local community for remembering our local veterans and their actions which are very much worthy of our consideration, ensuring their stories are remembered in a greater context.

This story is about Master Sergeant Willian Balt Hunt, a local veteran. Many here in our community still remember him.

William (Bill) Hunt was a local kid who graduated from Sandpoint High School in 1953, entering the US Army as a paratrooper. After his first enlistment he got out of the Army returning to Sandpoint to lead a normal life working as a logger with his dad. Bill returned to the US Army, volunteering for Special Forces (SF) training then subsequently becoming a “Green Beret” radio operator in 1961. He spent three tours of duty in Vietnam 1962, 1964 and his final tour in 1966.

On his third tour in the Republic of Vietnam 1966 he was declared missing in action. This is his story.

In 1966, the Vietnam War was escalating with operations ever increasing. The conventional war was intensifying with the largest battle up to that point in the war looming on the horizon. In III Corps, Tay Ninh Province, along the Cambodian border just northwest of Saigon (now Ho Chi Minh City) Operation Attleboro commenced. Its general goal was to find, then destroy North Vietnamese Army and Viet Cong logistical resources plus any enemy units operating in the area. Attleboro would slow enemy support and infiltration into the Saigon III Corps area. Among this conventional operation was a very unconventional unit, the III Corps MIKE (Mobile Strike) Force, led by an Army SF Team and manned by ethnic Chinese Nung soldiers.

In November Staff Sergeant (SSG) Hunt was due to rotate out of country in a month. He was a passenger on a helicopter returning from R and R (rest and relaxation) to Soui Da, an SF Camp and local SF Headquarters for combat operations. As a passenger on the helicopter, he was listening to traffic on his radio headset explaining combat actions on the ground. He quickly realized he knew the unit in contact (III Corps MIKE Force) and convinced the pilot to divert to conduct a med-evac (medical evacuation) for the American lead company that had suffered heavy losses.

At a landing zone northeast of Soui Da, 10 miles from Dau Tieng, SSgt. Hunt was lifted into battle to help evacuate the wounded. The helicopter was unable to take off due to overloading, so he voluntarily left the relative safety of the aircraft to help reinforce the MIKE Force. He had no equipment or weapon, receiving his combat equipment from SSG Jim Monaghan (an injured SF soldier just loaded into the helicopter). Bill found a weapon on the battlefield as the helicopter left with the wounded.

They fought for another two days taking over as platoon leader for SSG Monaghan’s platoon with the NVA and Viet Cong continually probing the MIKE Force. The North Vietnamese forces constantly attacked the position the unit was maintaining during the evening.

After two days of heavy fighting, and numerous casualties, the MIKE Force was overrun by numerically superior forces on November 6. As SSG Hunt drug the wounded company commander, Sergeant First Class (SFC) George Heaps out of danger but while doing this, Hunt was gravely wounded by a bullet that hit him in the shoulder, penetrated his upper back, and exited his side. SSG Hunt still succeeded in moving Heaps to a covered position where both passed out from loss of blood.

Both Heaps and Hunt later regained consciousness, found a .45 Cal pistol on the battlefield and with two wounded Nung MIKE Force soldiers crawled toward a landing zone for extraction. Progress was very slow because of their wounds, and finally SSG Hunt told Heaps he could not go farther, and for Heaps to continue leaving him there. He would cover their withdrawal with his pistol. SFC Heaps left one Nung soldier with SSG Hunt but when a helicopter arrived at the lading zone the Nung soldier came running towards SFC Heaps saying, “Hunt dead, Hunt dead.” Heaps and the two Nung soldiers were evacuated. Heaps passed out for over 24 hours due to his injuries and the search for Bill was conducted several kilometers to the southeast, in the wrong direction. When searches were made to recover his body, it was not found.

SSgt. William B. Hunt was declared missing in action and has been carried in that category ever since November 1966. He earned the Silver Star and was awarded the Purple Heart for his wounds. His name is inscribed on the Vietnam Memorial Wall in Washington D.C. Panel E12, row 22 on the left boarder. His name has a “cross” next to it signifying his MIA status. His name is also included at on the War Memorial Field monument here in Sandpoint and on the Veterans memorial monument in River Front Park, Spokane. During his missing status Staff Sgt. Hunt was promoted twice, first to sergeant first class, and finally to master sergeant.

Source: Compiled with some corrections by his son and by Homecoming II Project 15 October 1990 from one or more of the following: raw data from U.S. Government agency sources, correspondence with POW/MIA families, published sources, interviews. Updated by the P.O.W. NETWORK 2020. 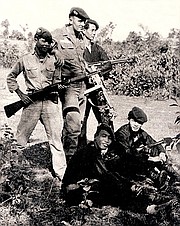 SSgt. Bill Hunt (no shirt) is pictured loading a Jeep in 1966 as he works with indigenous soldiers during his third tour in Vietnam.