Scott Brusaw, center, talks to U.S. Army officials about Solar Roadways' innovative panels, designed to be used in everything from roadways to sidewalks. The Sandpoint-based company learned this summer that they'd been selected for a Small Business Innovative Research project at an Army base to test the panels in a real world setting.
(Photo courtesy SOLAR ROADWAYS)

Heidi Shyu, Undersecretary of Defense for Research and Engineering, talks to Solar Roadways co-founder Scott Brusaw at the recent Association of the United States Army Expo in Washington, D.C. recently.

SANDPOINT — Pretty soon, a U.S. Army cold weather research base will be able to harness the power of the sun when 180 panels from Solar Roadways are installed at the facility over the coming year.

"I always use the hashtag 'greener and safer' because that really encapsulates for me what we're doing," Julie Brusaw told the Daily Bee. "We're trying to help the earth be greener and safer. It has national security implications since the military bases need to keep things safer as well as environmentally. I just love that we're able to put together a package that does all of that in one solar panel."

The Sandpoint-based company learned this summer that they'd been selected for a Small Business Innovative Research project at an Army base to test the panels in a real-world setting. But it wasn't until this fall that Solar Roadways founders Scott and Julie Brusaw learned what base had been selected. The couple was able to visit the base — the Cold Regions Research and Engineering Laboratory in Hanover, N.H. — to talk to base officials and determine the best location on the campus-like facility last month.

"We're super excited because it's the place where the Army researches cold-weather solutions," she said.

Scott Brusaw joked that they'd originally hoped that there would be a base within driving distance, but said when they learned about the research lab, they realized it was the perfect spot.

"[They] told me what they did and sent me the link to their website, and I'm clicking through and looking at all this cold weather stuff they do," he said. "I thought, 'This is perfect. All the guys there are civil engineers who work on roadways, pavements and concrete, stuff like that.'"

With its dedication to cold weather research and desire for a sustainable solution, the Brusaws said the New Hampshire base will showcase all of their panels' features.

As part of the grant, Solar Roadways will be installing panels on a pedestrian walkway as well as a portion of a parking lot. The location has seen a number of visitors and staff slip on the ice, something base officials hope the Solar Roadways panels will help prevent.

Installation will take place next year, with the panels scheduled to be in place before the snow flies next winter. Once installed, the base will be able to test the newest panels, which will include all of the best features of all previous iterations.

"This way, we can showcase all of our features," Julie Brusaw added. "If we put it in Arizona or someplace else, that would be awesome; they would get more energy. But this way, you get to showcase all the features, which we really wanted to do."

As a former Marine, Brusaw said he is excited about being able to help the military become more sustainable. Depending on the base, he said some could go completely off-grid due to the number of roads and sidewalks that could be outfitted with panels.

"We would love to be part of that solution and let them get off-grid completely," he added. "If you took a normal-sized base, you've got parade grounds everywhere; you've got roads everywhere, sidewalks and stuff. If you outfitted all that with solar panels, you could take that base offline."

The grant is not the first one the company has received. The innovative product first garnered the attention of transportation officials — and led to the pilot project at Jeff Jones Town Square in Sandpoint. Next came grants at several military bases, where military officials loved the idea but didn't have funding to move forward.

Speeding up the process will be the company's work with a Detroit, Mich.-based manufacturer, which is confident the price of the panels could drop dramatically due to the economies of scale.

"We've been working toward mass manufacturing for a long time," Scott Brusaw said. "We're finally gonna get there." 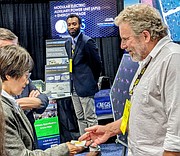 Heidi Shyu, Undersecretary of Defense for Research and Engineering, talks to Solar Roadways co-founder Scott Brusaw at the recent Association of the United States Army Expo in Washington, D.C. recently.